Love and loss in the fight for Billings air quality

In the late 70s and 80s air quality in Billings was so polluted, many residents suffered from asthma, including children. One such resident was the late Eileen Morris.

Eileen describes her early days in Billings, “…my life in this neighborhood started a long time ago. I was born in Billings in 1932 and went home to a mom-and-pop grocery store right over here on First Avenue and 19th. Spent the first 21 years of my life right there…

“The pollution that was in our air, we just took for granted. My family had a history of lung problems on both sides… It wasn’t until I was an adult and was consistently having respiratory problems that I began to wonder, ‘What’s causing this?’ That’s what led me to the organization that now is Northern Plains.”

When Eileen moved to a new neighborhood in town, she started to notice a trend in the number of people suffering from asthma:

In 1979, Eileen and Nettie, together with their neighbors formed Yellowstone Valley Citizens Council (YVCC) to address the issue.

“We started going to Helena… We had the Board of Health helping us to research and figure out who to talk to, to gain more citizen strength…The things we covered in our research were that the oil refineries emit SO2, sulfur dioxide. That was what we thought contributed to our respiratory problems that could be identified… There was the [Cenex] Laurel refinery, the Conoco in Billings, and [ExxonMobil in] Lockwood.”

Yellowstone Valley Citizens Council spent the next several years standing up to these corporations. At the time, air quality information consisted of self reporting by the polluters themselves. YVCC was instrumental in installing air quality monitors in the valley and making the state stop relying on self-reporting.

Meanwhile, YVCC’s work on air quality was gaining attention. Air pollution was a national issue and led to sweeping legislation like the Clean Air Act of 1970. Because of their research and efforts to get air standards passed, Nettie says the EPA took their cues from YVCC:

“When the EPA started visiting with us, it was a very strong collaboration. They actually gave us credit for helping them get the Clean Air Act passed, because they had our information, our data to work with, and the monitoring here that we were going by. That really helped them a lot… I think we could feel good that we had played that big a part in getting the air quality legislation in place.”

Despite this triumph, it would take 20 years for the EPA to enforce robust air quality standards in Billings. 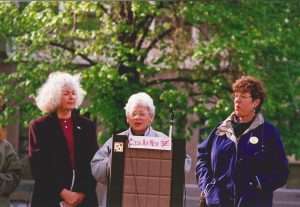 Eileen speaks at a Billings Clean Air Rally in the 80s

In the summer of 1985, Eileen and her friend Nettie were driving home from a meeting with the state Air Quality Bureau chief when Nettie suffered a severe asthma attack. Eileen describes what happened:

“…It just seemed like we drove through a plume of emissions right at ground level. Nettie rolled up her window real quick and I rolled mine up real quick. Nettie had the kind of asthma that triggered quickly. She immediately went into an asthma attack and by the time we got to the fairgrounds, she couldn’t talk anymore…

The next morning, just before 8 o’clock, I had a call from Nettie. She said she had just spent the worst night of her whole life and she wanted that bureau chief from Helena to know how she suffered that night.

That night, right after 5 o’clock when I got home, the ambulance sirens were sounding in our neighborhood and I realized they were on Maureen Street. When I got in the house, my phone was ringing and Nettie’s husband asked if I could come take care of the kids. He had just sent Nettie to the hospital in an ambulance. So, I went right over to take care of the kids while he was gone. While I stayed with them, I sat down and wrote a letter to the editor. Don, Nettie’s husband, got back, oh, I don’t know, maybe about 10 o’clock, something like that, 10:30, and told me she had died.

In my letter to the editor, I had written that the doctors had informed her that “sometime this might get you,” and she had put it in those words to me, too. “Someday this is going to get me.” But she told the doctors and she told the Air Quality Bureau people that this was her home, she had a business… her children lived here, her grandchildren lived here. They breathed the same air that she breathes and it was not fair to her family for her to pick up and go for her health and leave them behind.

So that made us even more certain that we were going to continue the fight.” 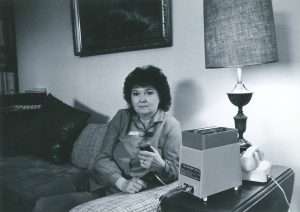 Nettie Lees with her respirator

In the following years, Eileen and Yellowstone Valley Citizens Council worked tirelessly for air quality enforcement in Billings through public pressure and lobbying. In large part due to Yellowstone Valley Citizens Council, and the work of Eileen Morris and her neighbors, air quality is significantly improved in Billings today. Finally responding to pressure, in 1993 the EPA ordered Montana to revise its pollution control plan for the Billings-Laurel area. Since then, SO2 emissions have declined by 75%.

Eileen says, “air quality is now an issue with regard to climate change, and I guess we were the pioneers in thinking about air quality and its effects on humans at least.”

And Eileen is right. Stories like hers and Nettie’s can still be seen in communities across the country as climate-related health concerns rise. In 2019, “ecoAmerica asked Americans whether they have been affected by a variety of climate impacts. Nearly half (45%) reported being affected by breathing problems, such as asthma.” Furthermore, “nearly 9 in 10 Americans believe that we have a moral responsibility to create a safe and healthy climate for ourselves and our children.”

We can carry on Eileen, Nettie and YVCC’s vision of healthy, thriving communities for our children and grandchildren by continuing their legacy of grassroots action. Just as we don’t have to look very far back in our history to know it can be done, we don’t need to look very far past our own fences to protect our climate, right here at home.

Just over forty years of organizing with YVCC later, Eileen passed away in September 2020. To those who take up the work she leaves behind, she has this advice: “I think a lot of people think that they don’t have any power to correct things… In fact, I’ve learned that big things can happen when a few people get together to see that they happen.”

Are you looking for ways to get involved to improve your community like Eileen and Nettie? Consider becoming a Northern Plains member: NothernPlains.org/join