How a Bill Becomes a Law

Follow this diagram to learn how a bill moves through the Legislature to become law. Feel free to download this and refer back to it during the session!

Before a bill is introduced, the bill drafting process starts. This is when the Legislative Services Division (a.k.a. analysts and attorneys) edit and hone a bill’s language to follow legal compliance. During this time, a bill is given a bill draft number starting with “LC”, for example “LC 3567.”

NOTE: Legislators can also introduce Resolutions in either Chamber. “HR” stands for House Resolution and “SR” denotes Senate Resolutions. Resolutions do not become laws, instead they are expressions of the legislature’s sentiments or positions on issues. An example is a resolution that Northern Plains is working on this session to create a “Healthy Soils Week” in Montana.

Every bill is referred to a committee and goes through at least one Committee Hearing before it’s voted on by the whole chamber. Committee Hearings are important because it is the only time that non-legislators can testify for or against a bill. This means it’s the only time you can speak directly to legislators telling them why a bill matters to you. Some examples of committees are the House Judiciary Committee, the Senate Natural Resources Committee, etc.

After its hearing, the Committee then takes a vote on the bill. It can either get passed, tabled, or killed. Tabling a bill means it will be reconsidered for another day. However, “tabled” often means the bill will die, because there usually isn’t enough time in the session to bring a bill back.

If a bill passes out of Committee, it goes back to the whole Chamber – the House or the Senate – for “2nd Reading,” where legislators can debate and discuss the bill before it is voted on by the Chamber in a floor vote. The days and hours before floor votes are cast are important times to lobby our lawmakers in-person at the Capitol, or through letters, phone calls, emails, and other creative actions to persuade them to vote in our favor.

“Third Reading” is the final vote to move the bill up or down in its Chamber.

If a bill survives 3rd Reading, it gets transmitted to the other Chamber. This happens during the period of the legislative session known as “transmittal.” When a bill moves to the other Chamber, the process starts all over again. There is another Committee Hearing, another series of floor votes, and more opportunities to testify and lobby on bills that are important to us! Bills that don’t survive 3rd Reading do not get transmitted and are therefore dead.

If the second Chamber passes a bill with amendments, the bill needs to go back to its original chamber to get approved. If it doesn’t get easy approval, the bill goes to a “Conference Committee” for further consideration.

Once a bill is passed by both Chambers, it goes to the Governor’s desk. The Governor can then sign it into law, veto it, or sit on the bill. If the Governor takes no action after 10 days, the bill becomes law. 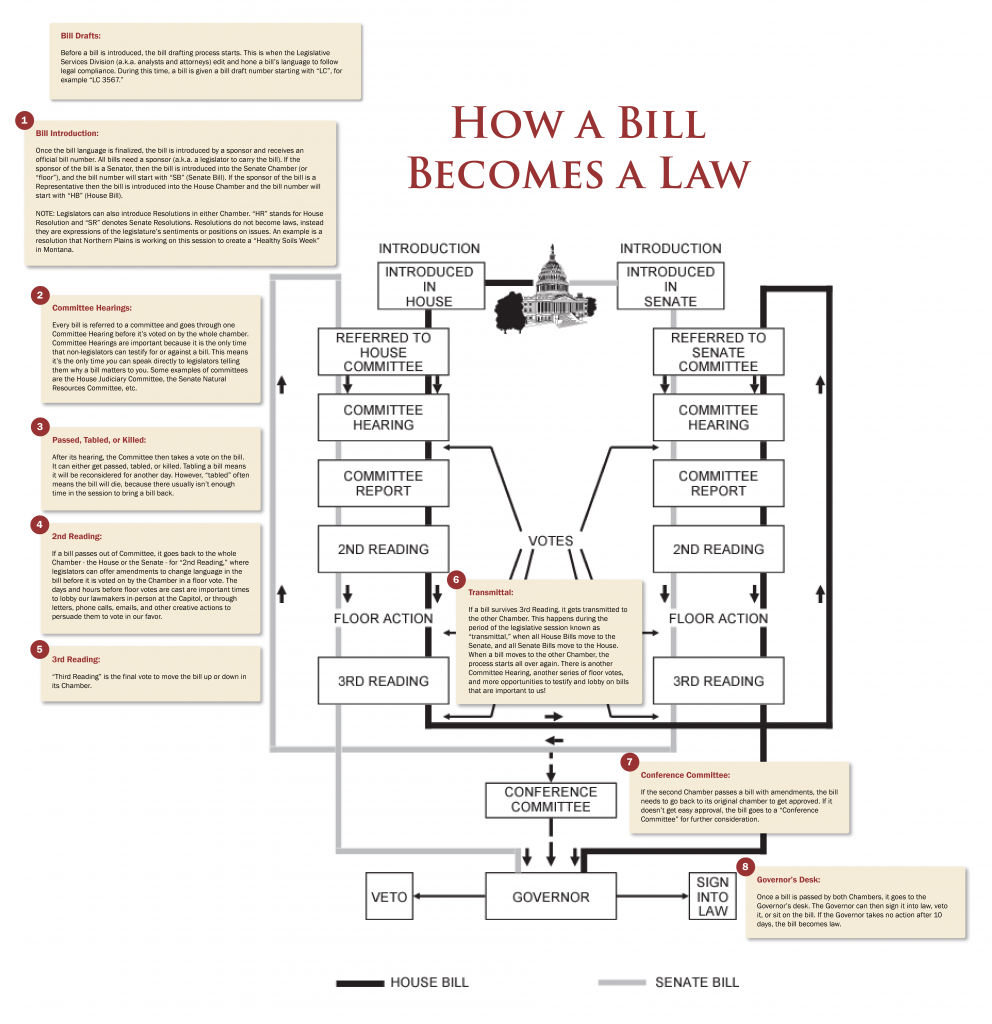